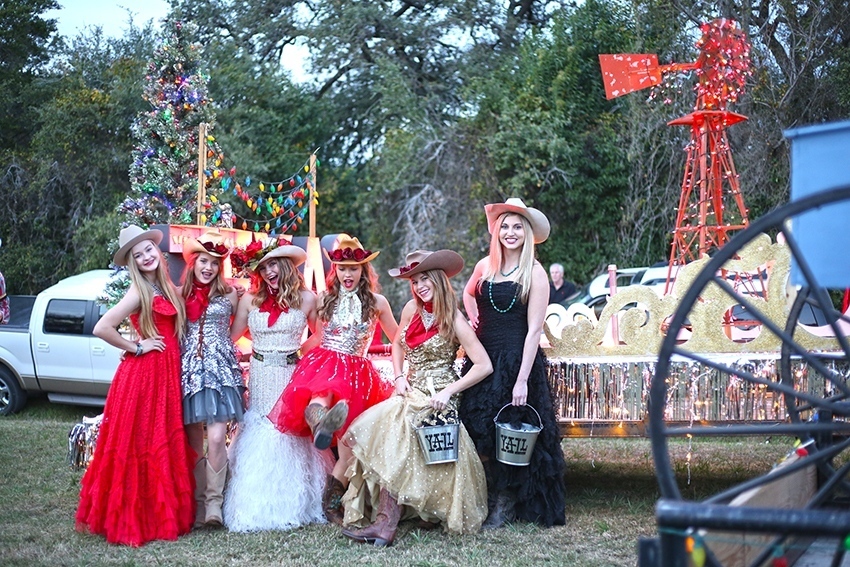 y’all remember those old fashioned Christmas parades? the ones at night? where everything is glowing and sparkling with Christmas lights? where marching bands march in cadence playing carols whilst twirlers were dressed up in their winter sequiny leotards tossing batons in the air just a few steps ahead? and in overton, it meant the Kilgore College Rangerettes were comin’ to town. they would regally and royally march through the streets … periodically stopping to do some of their famous high kick routines … they were larger than life – and they marched in the Overton Christmas Parade every year. and do y’all remember ACTUAL floats? real FLOATS people decorated for weeks, months. not just tractors. now, don’t get me wrong, i love a good old tractor as much as the next farmer. but after about a dozen, my mind does start to wonder. and i miss the floats. like this one… 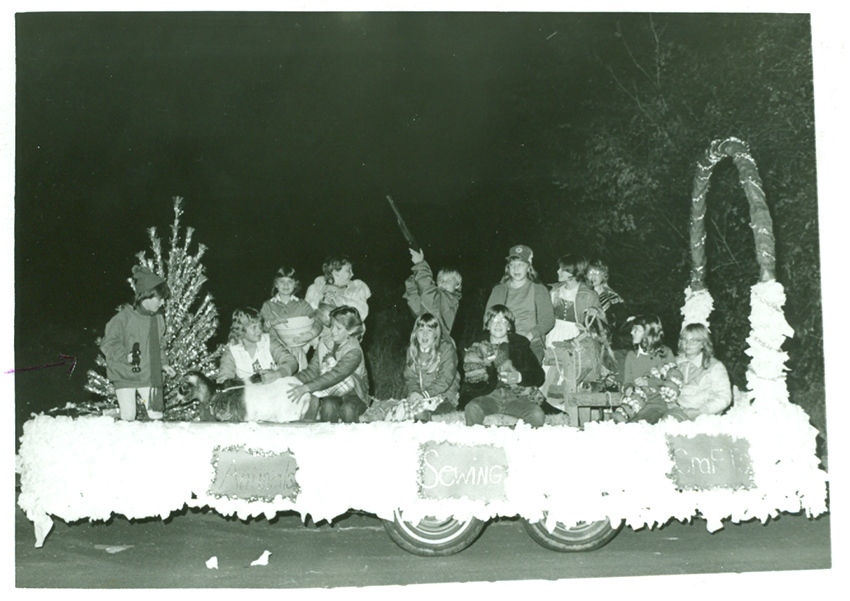 this was our 4H float back in good ole overton, texas (for more about overton, read here). that’s me there on the left in front of the metallic Christmas tree, and amie is on the far right in the rick rack square dancing dress (pretty sure we still have that dress). this was back in 1984ish … clearly no one was worried about a goat going rogue in the middle of the parade route and causing complete chaos, but i guess the plan was that in this situation, the kid in the back would just shoot in the air to create a distraction (clearly there are no flaws in this plan). mom was in charge of decorating the float – we would all meet everyday after school armed with glitter and glue and tissue paper flowers. we would stuff chicken wire with our little tissue paper flowers for weeks. and by dang, we won 2nd place according to my scrapbook (a totally legit news source).

nevertheless. this pic gives me all the feels. all the small town, nostalgic, cozy, warm fuzzies that you could possibly conjure up in your head. and i’m incredibly giddy that we get to relive all of these feels (minus the marching band and twirlers and the Kilgore College Rangerettes) every year at Round Top’s lighted Christmas Parade. last year was it’s inaugural year and it may be texas’ best kept secret.

the JG float was a wild and untamed hodge podge of inspiration (which basically means we threw this bad boy together in a hot minute because we were literally losing our minds trying to finish Miranda’s Airstream re-do). it was bright. it was gaudy. it was sparkly and broke every single rule of decorating. 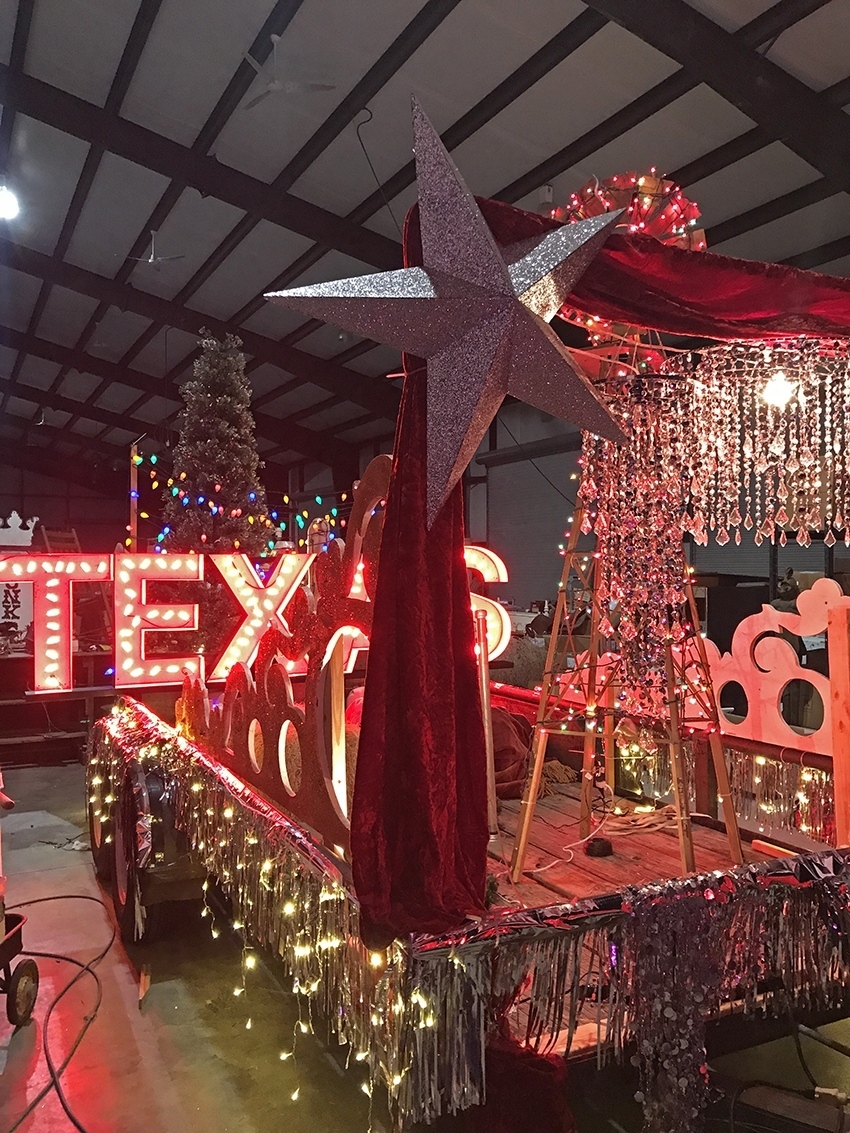 it was our ode to prom queens, to junk, and to our beloved small town of Round Top. 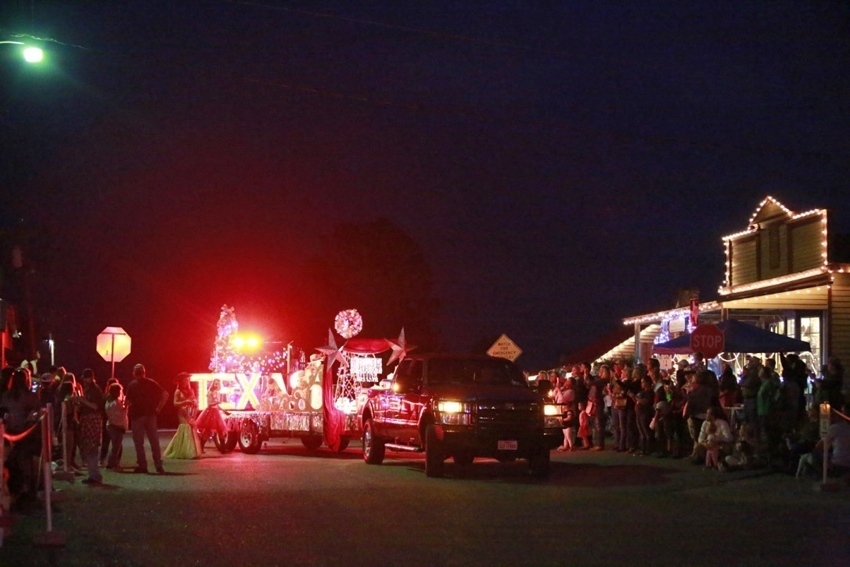 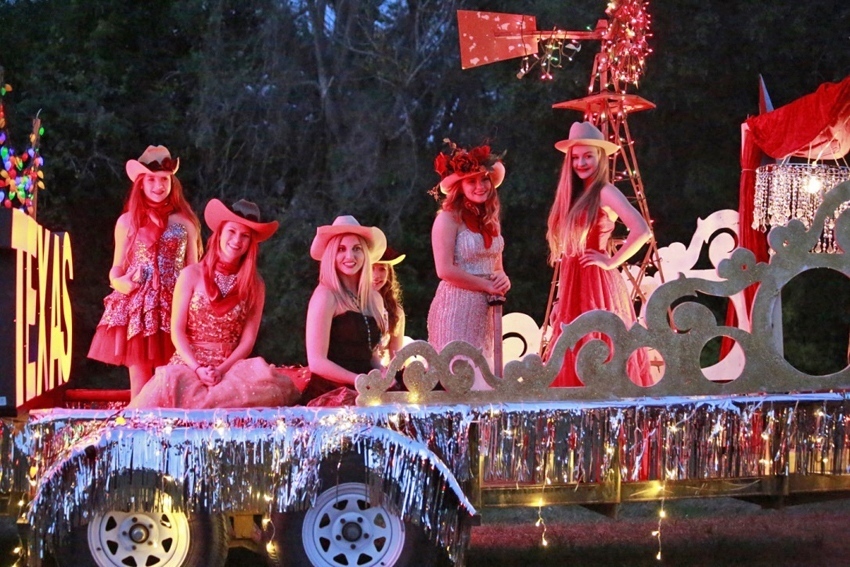 Large Marge, not to be left out was a glorious gaudy glowing sight to behold… 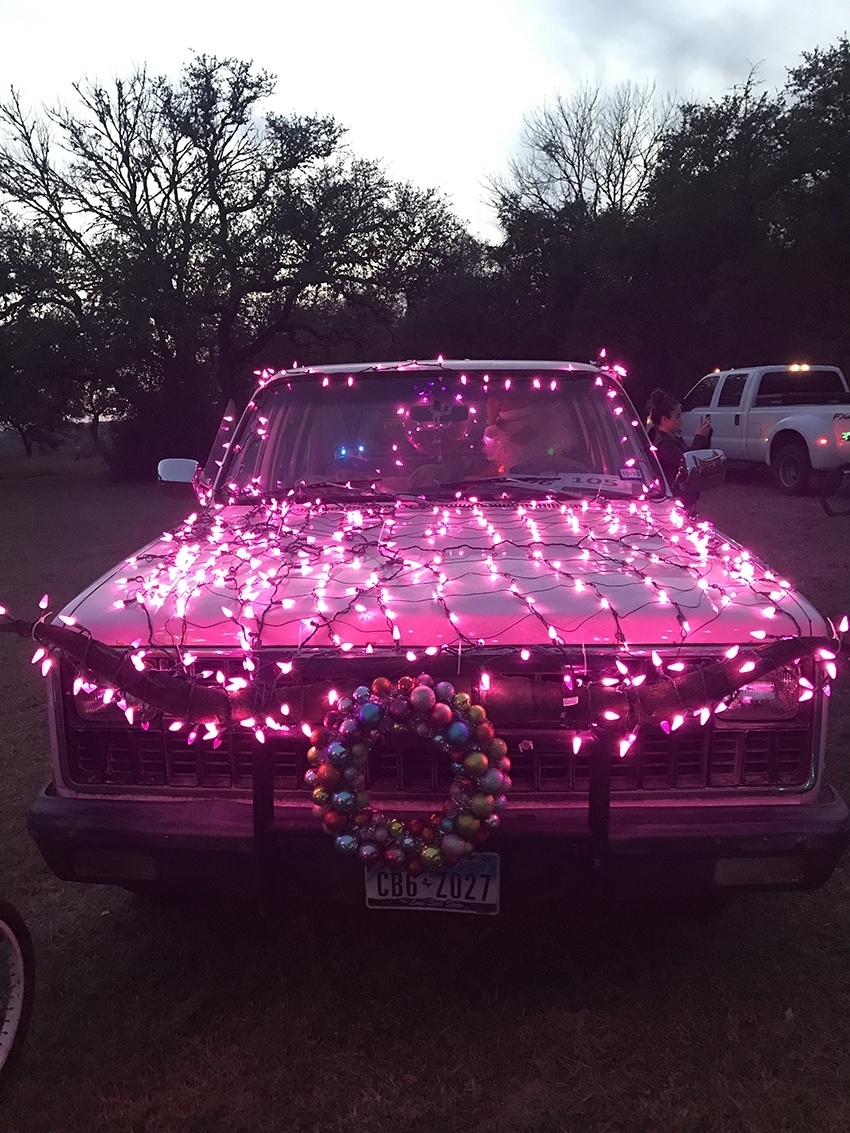 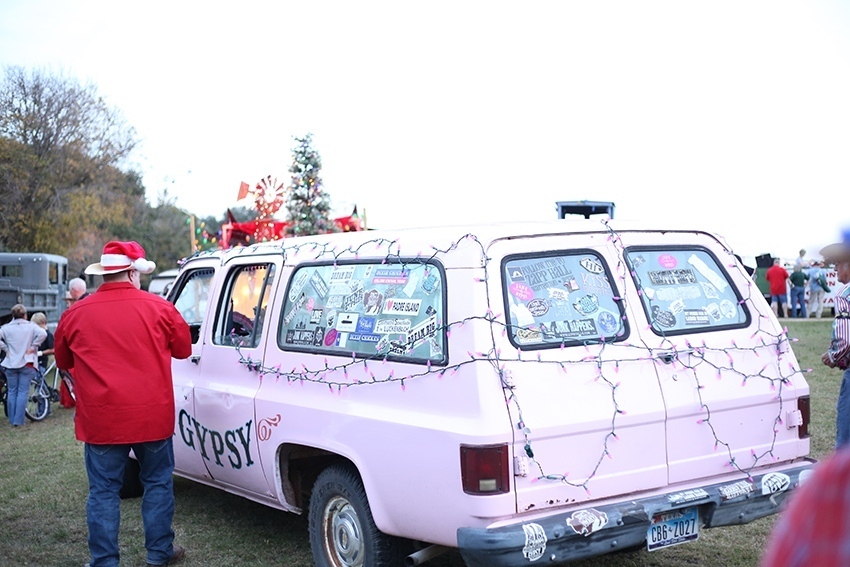 with Santa behind the wheel (because, of course) … 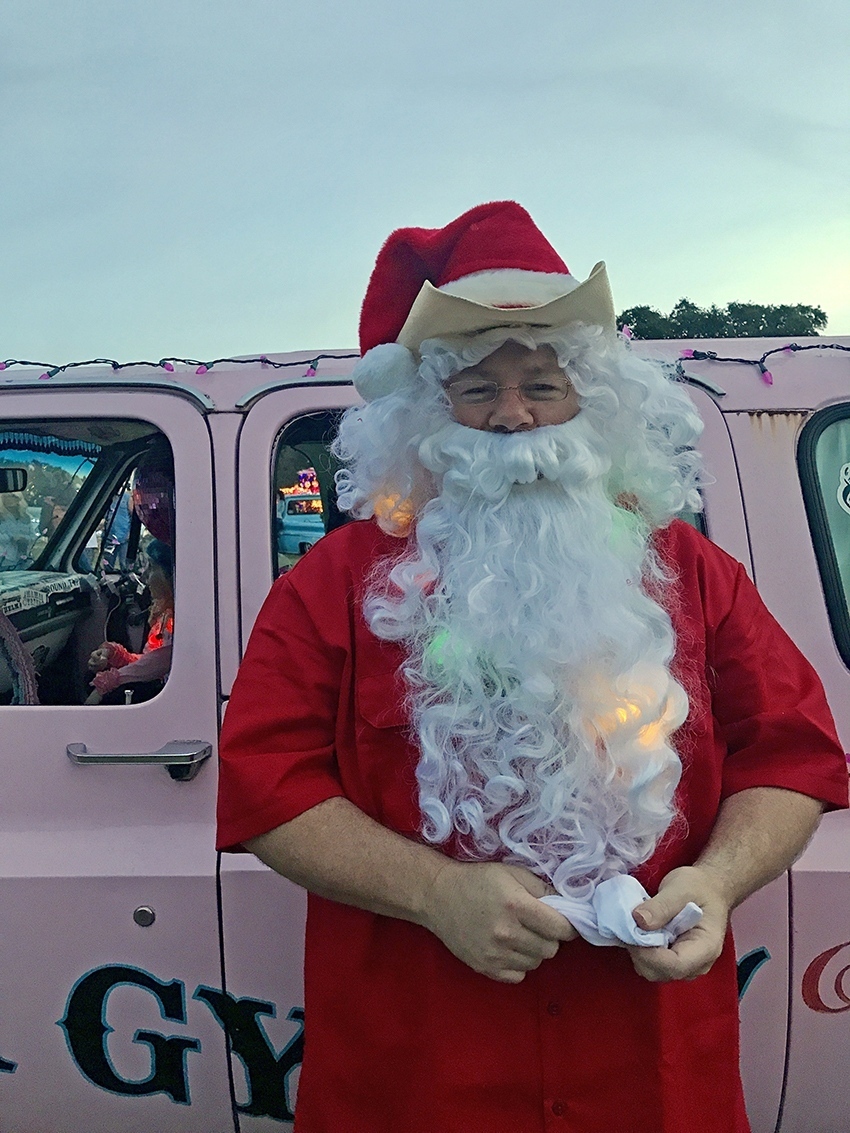 the Grand Marshall was none other than The Daytripper himself, Chet Garner and fam driven by Gypsy Dad and Gypsy Mom … 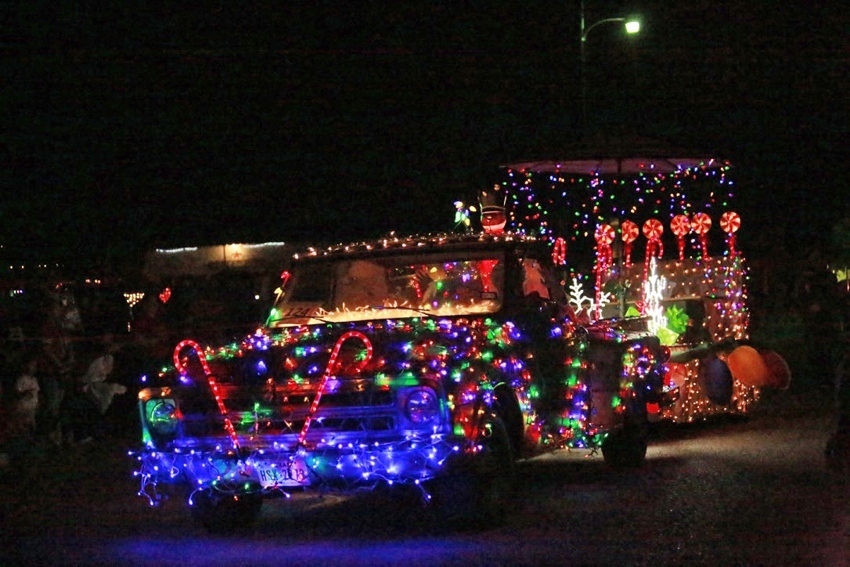 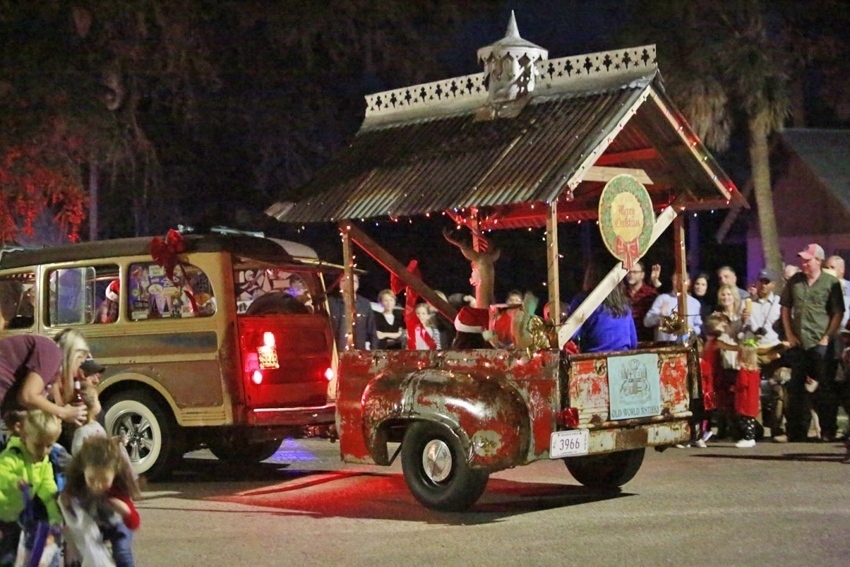 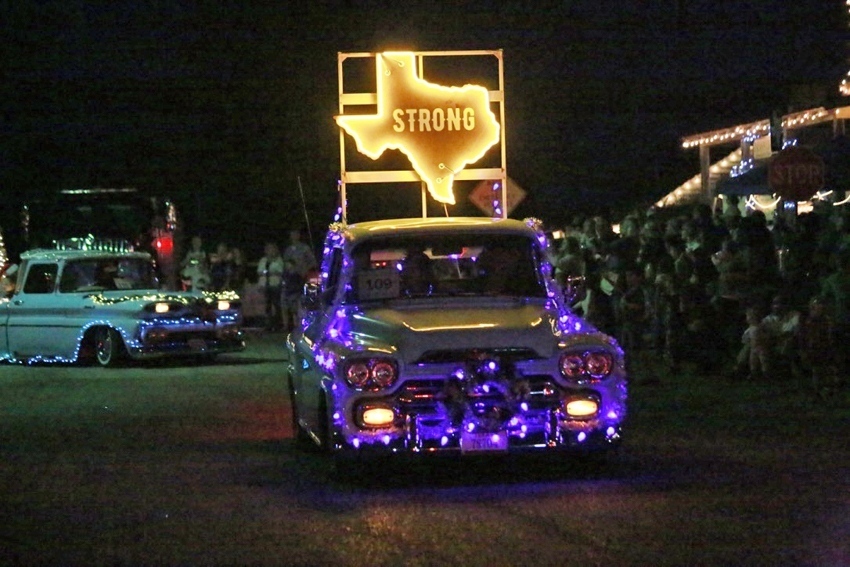 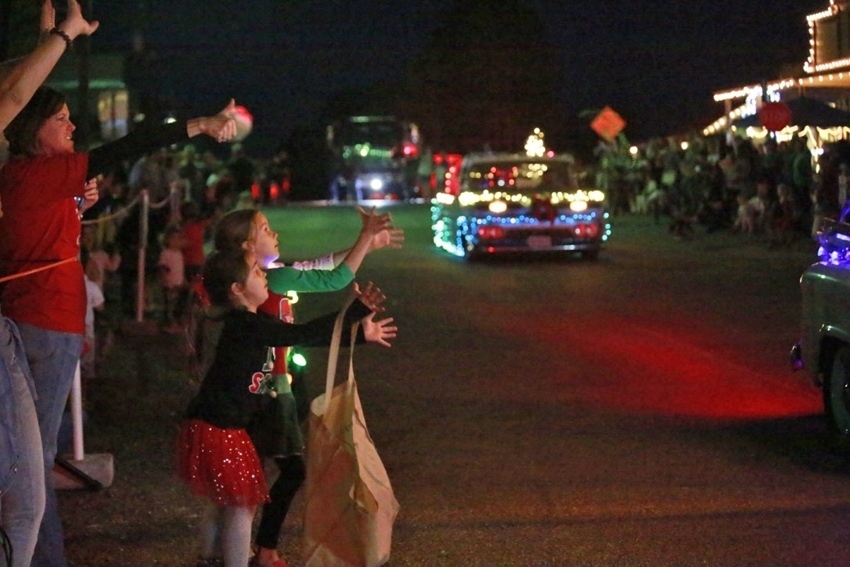 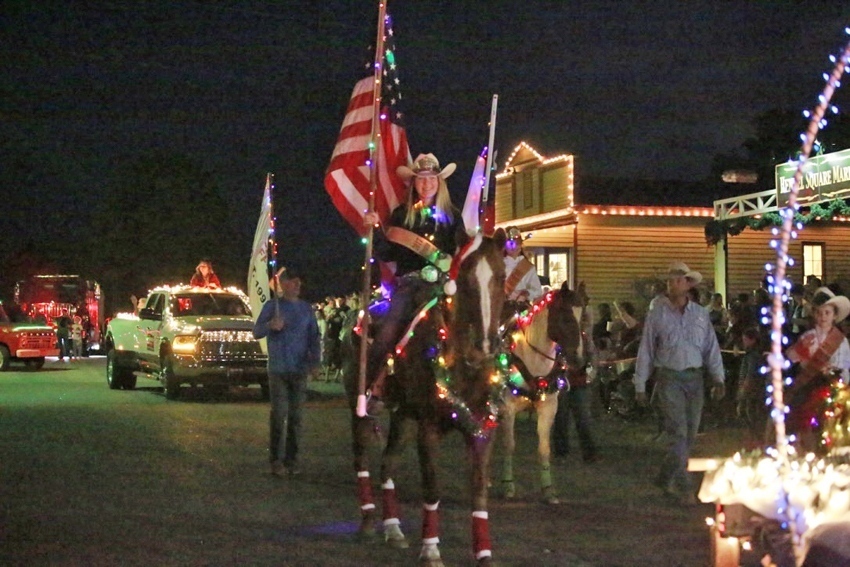 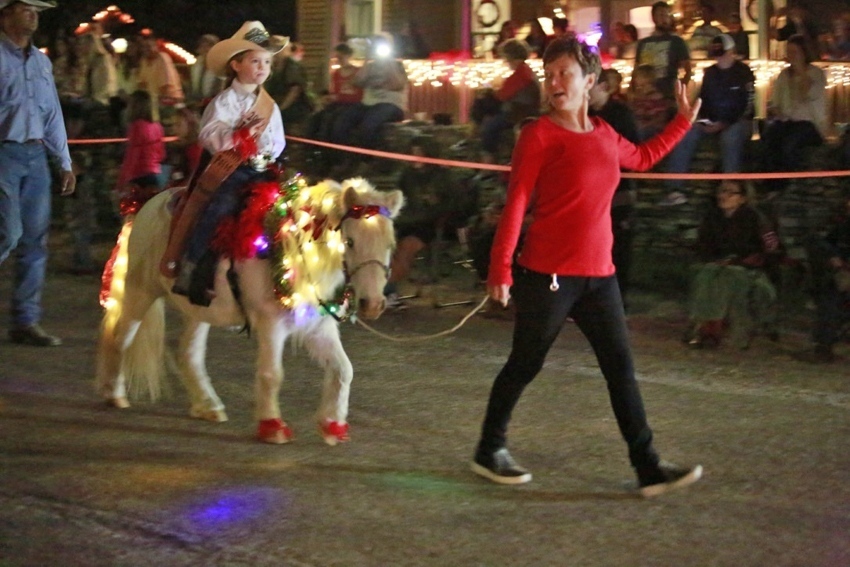 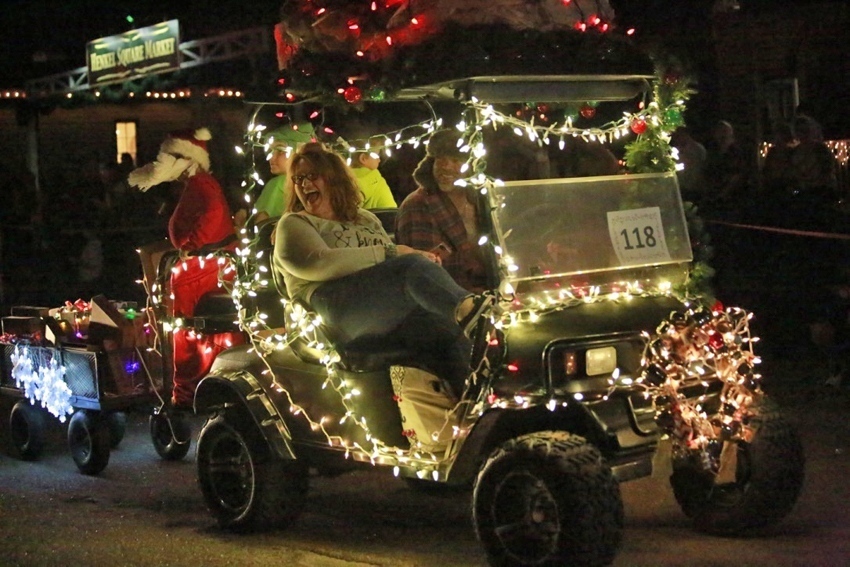 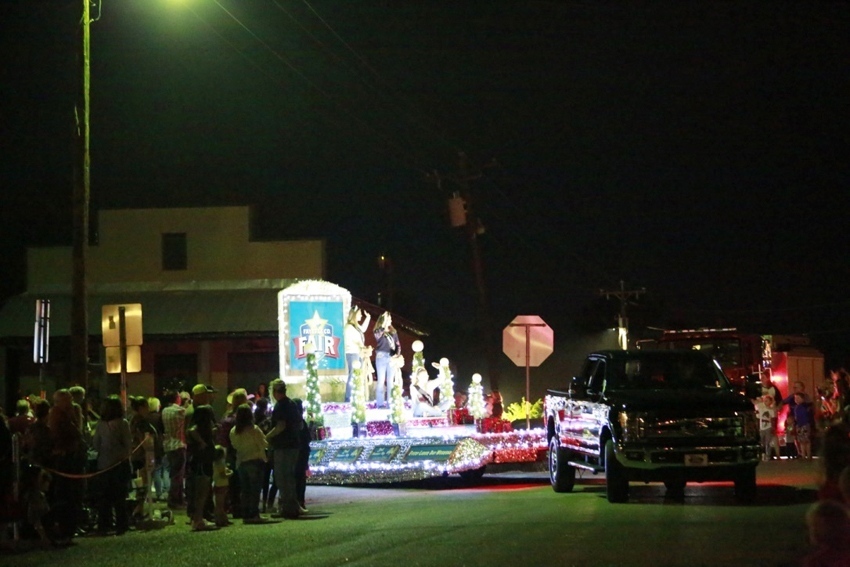 we may not have the Kilgore College Rangerettes, but we do have Cousin Eddie … 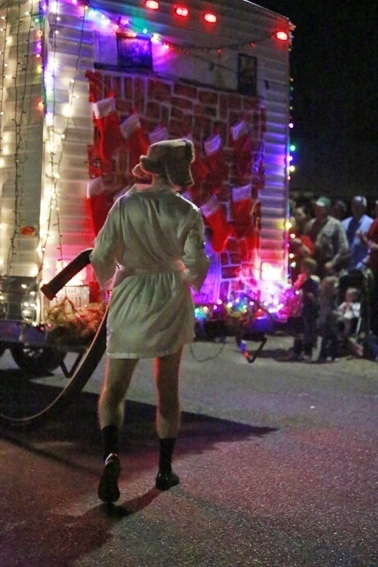 and that is pretty damn awesome. 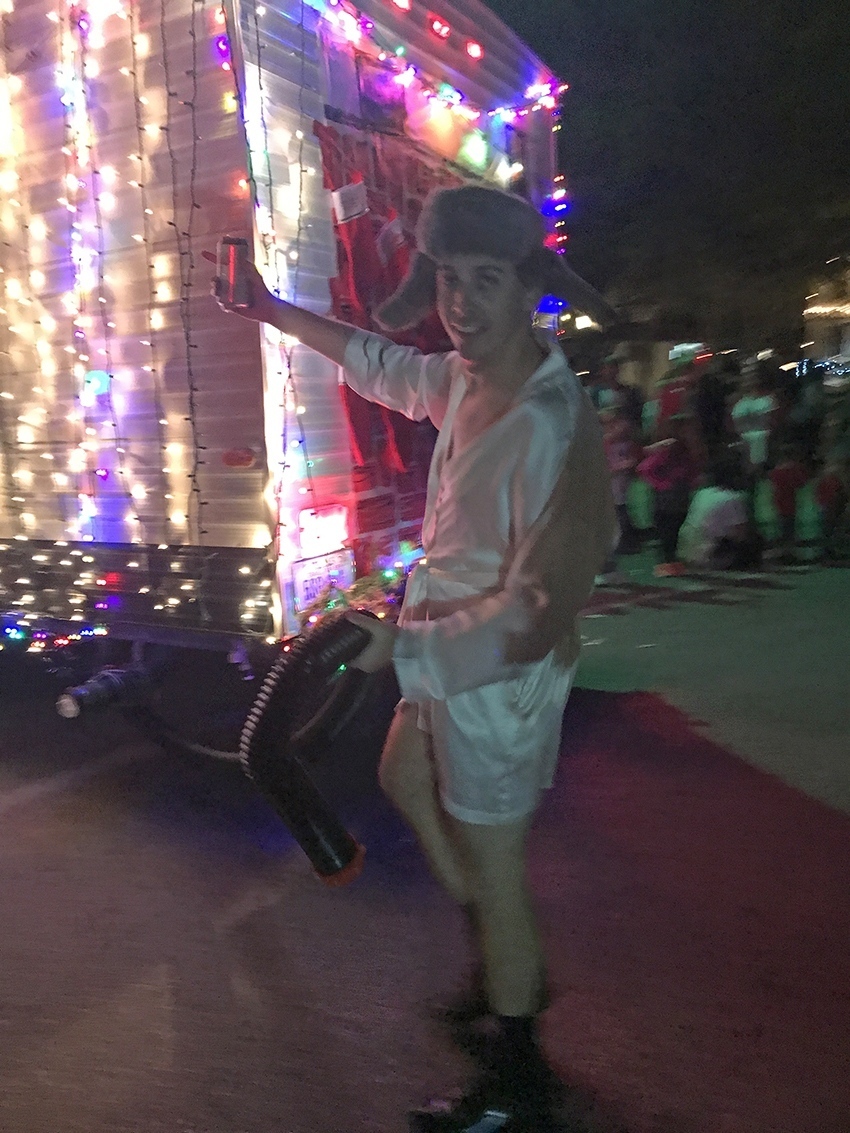 after the parade, there’s an old fashioned street dance featuring Mayeux & Broussard. there’ll be food on the square and OF COURSE, SANTA IS COMING!!!

SO y’all MARK YOUR CALENDARS now!! this year’s Old fashioned Lighted Christmas Parade and ALL of the fun that goes along with it is happening, Saturday, December 1st!

it’s truly a FULL DAY OF FUN…starting that morning with breakfast with Santa at Royers Cafe and a Farmer’s Market on the Square! 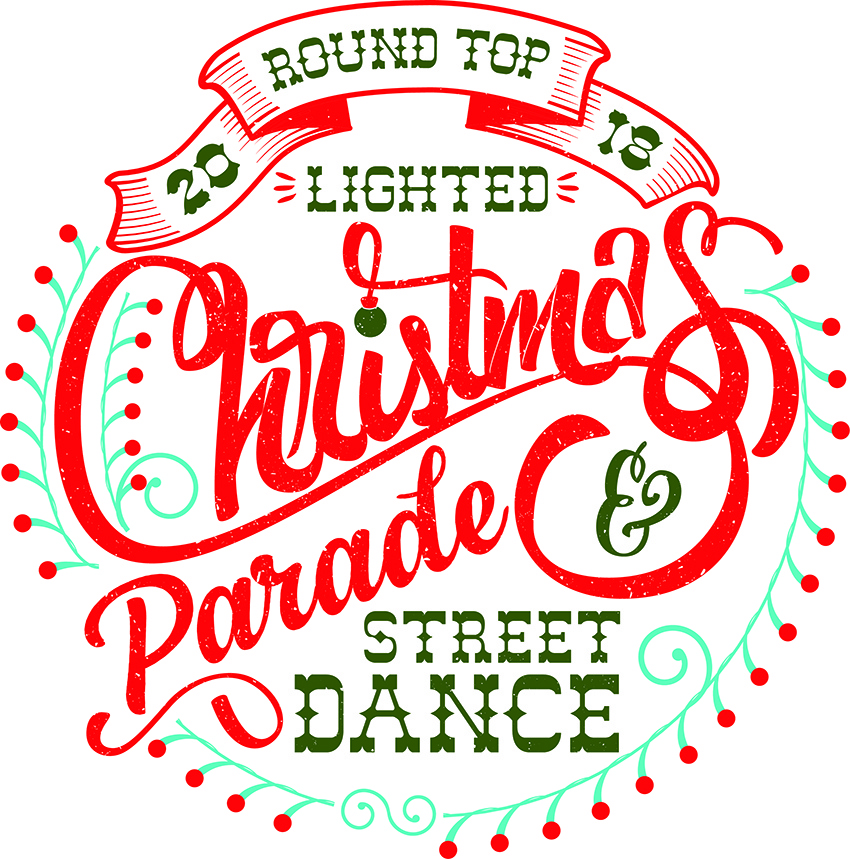 Starting at 10 a.m. – Holiday Shopping (with many shops open late)

4:30 p.m. – 6 p.m. – Book Walk, Face Painting, and Other Kids’ Activities on the Square
Cookies and Cocoa at the Courthouse

After the Parade – Santa Visits at Henkel Square

***Want to enter a float in this year’s parade? the answer is ALWAYS yes here!! BIG HUGE prizes are awarded to the winners!!! (Email: info@roundtop.org)***

Go here to get all the deets for the full day!

it’s more family fun than you can shake a stick at. it’s the only way to kick off the holiday season.

**thanks to kelley keen for the parade shots!

if you build it… 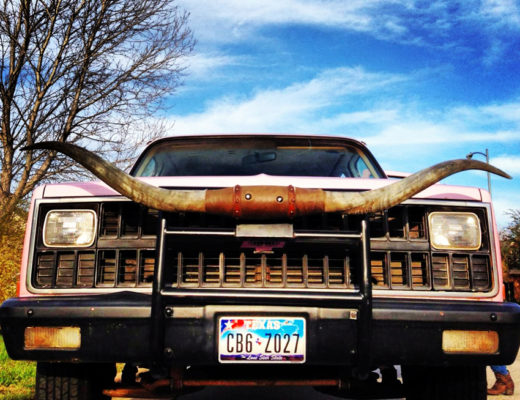 houston, we have a garage sale. 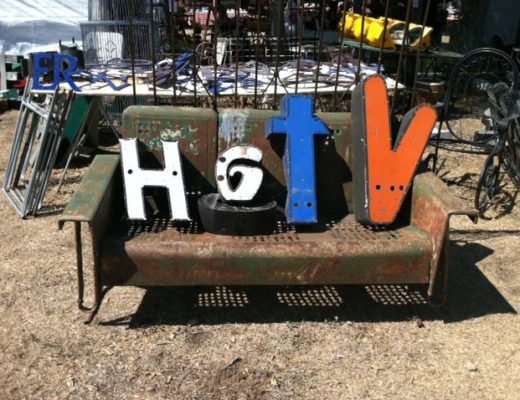 hgtv. home is where the junk is.

📣Heads up erbody! We’re so sorry but we have

Texas, our Texas. 💙🌻⭐️ Reposting these

Oh, we’re just hanging out here in our fringe tr

We’re pretttttty sure @jennifer.garner is suppos

Just reliving some of the great junk memories and

Turn out the lights. The party’s over. The end o

📣Heads up erbody! We’re so sorry but we have

Texas, our Texas. 💙🌻⭐️ Reposting these

Oh, we’re just hanging out here in our fringe tr